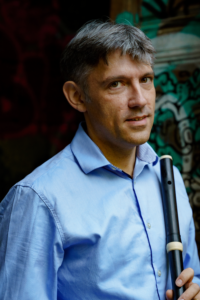 Bruno Harlé began his musical path through the flute with Thierry Boiteux and Nels Lindeblad, near Paris. Subsequently, he decided to turn to the baroque flute and entered in the Paris Conservatory in the class of Pierre Séchet. He became the owner of the diploma of Early Music.

At that time, he had the chance to discover new kinds of flutes through learning flute repertoire of the nineteenth century, but also traditional Irish music with François Lazarevitch.This expanded course offered him the opportunity to play concerts with La Grande Ecurie led by Jean-Claude Malgoire. In parallel, he continued his practice of playing the traditional flute in Breton and Irish dance repertoires, integrating the arSkolpenn band.

He was able to exercise his practice and deepen their experience of Irish music with great musicians: Kevin Crawford, Brian Finnegan and Cormac Breatnach. He teaches Irish flute and tin whistle (traditional flute) at the association “Irish flutes” in Lyon.