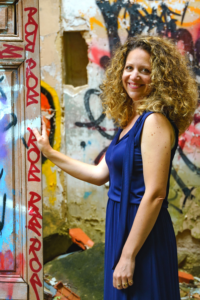 Born in Thessaloniki (Greece), Ilektra began her singing studies at the Neo V. Tsampali Conservatory in Thessaloniki. In 2004, she was admitted to the Schola Cantorum in Basel alongside Rosa Dominguez and Andreas Scholl. She received her early music master’s degree in 2009. In the following year she joined the class of Marcel Boone at the Music Academy of Basel to deepen her technical skills and vocal repertoire. In same year, she was also a semifinalist in the Cesti competition in Innsbruck (Austria).

With the support of the opera academy network ENOA, she took part at the Academy of the National Opera of Poland (Warsaw)in May 2014. In October of the same year she performed at the Rossini residence of the Gulbenkian Foundation Lisbon. She sang the part of Virtu in L’incoronazione di Poppea by Claudio Monteverdi at the National Opera of Athens (Athens Festival in 2011, Head : Mr. Chryssikos , directed by A. Papadamaki).

She also sang Elvida in the opera by Alessandro Scarlatti, Penelope la Casta (Head : A. Marcon , directed by Manfred Weiss). In 2013, she gave a recital of Spanish Songs by Manuel De Falla, with the National Orchestra of Basel and then performed a one-month tour in Japan as a soloist.

The year 2014 was very important for her career, with notably her first title role (L’enfant) in L’enfant et les sortilèges of Ravel at the National Opera of Basel. That same year she was also selected for the role of Lucilla (La Scala di Seta of Gioacchino Rossini) as part of the Rossini Residence of the prestigious Academy of Lyric Art Festival of Aix en Provence.

In 2015, she sang Marianne in Il Signor Bruschino of Rossini (Gulbenkian Foundation Lisbon, Head: Yi-Chen Lin, directed by Claudio Desderi). That same year, she was selected to participate in the workshop Il viaggio a Reims of Rossini with director Stephan Grögler in the Royaumont Foundation. Very interested in the links between traditional music and art music, she explores these relationships in the Greek repertoire of composers such as Theodorakis and Hadjidakis, and in ancient Gaelic music with the Curious Bards.