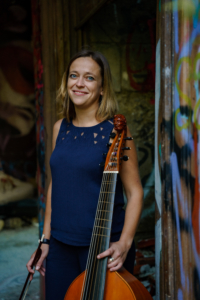 From when she was six years old, Sarah began the viola da gamba in the class of Christian Sala at the Conservatory of Perpignan. In 1995, she joined the class of Coen Engelhard at the Toulouse Conservatory, and in 2003 the class of Marianne Muller at Lyon’s Conservatory where she graduated in 2008. She has participated in many workshops and master’s classes with the greatest of Early Music: Jérôme Hantai, Wieland Kuijken, Christophe Coin and Jordi Savall.

Alongside this well-supplied route, she is passionate about Irish traditional music. She undertakes a work of reflection and research on the interpretation of the ancient Irish and Scottish music on the viola da gamba. This interest and long-term work with ancient Gaelic music has led her to participate in many traditional music festivals in France (Celti’cimes, Tocane …).